Revealed at this year’s San Diego Comic Con, here is the Suicide Squad trailer we promised! I am a huge fan of the current comic book run and it looks like David Ayer and John Ostrander went to great lengths to make sure this movie captured the grit and spirit of said comics. The premise of Suicide Squad is a black ops agency, led by Amanda Waller (Viola Davis), puts together an elite team using the world’s worst criminals. They are tasked with completing missions deemed…you guessed it, suicidal. The big question…how to keep all those baddies in line? Although we have seen the reveal pictures online, the trailer gives us our first introduction to Jared Leto’s take on the Joker. With some awfully large clown shoes left to be filled by the late Heath Ledger and the outstanding Jack Nicholson, this is no small feat. From his laugh alone, I think Leto will do the legacy proud! Suicide Squad gives Bat-fans their first on screen interpretation of Harley Quinn played by the insanely hot Margot Robbie as well as Killer Croc (Adewale Akinnouye-Agbaje). The rest of the squad is rounded out by Deadshot (Will Smith), Captain Boomerang (Jai Courtney), Enchantress (Cara Delevingne), El Diablo (Jay Hernandez), and Rick Flagg (Joel Kinnaman). Much like Guardians of the Galaxy was a runaway sleeper hit for Marvel, I believe Suicide Squad will do the same for DC. Suicide Squad hits theaters August 5, 2016 and is not yet rated. 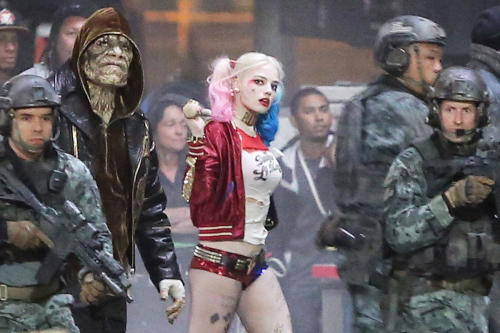 5 thoughts on “Suicide Squad is no Joke!! But Seriously…”