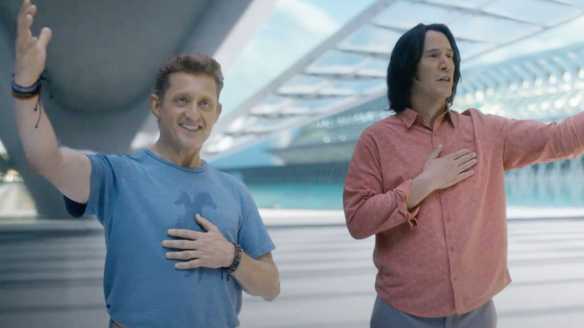 The year is 2020. The future has become uncertain. Mankind faces obstacle after obstacle and our way of life is in peril. Just when all seems lost, our time traveling heroes, Bill S. Preston Esquire and Ted Theodore Logan return to show us the future is still most excellent.

The date: June 9th, 2020. The time: 6:24 in the morning. I am awakened to a screaming goat (my text tone…don’t ask) notifying me that I have a message from my friend Lissa. Wiping the sleep away, my eyes adjust, and I realize she has sent me the trailer for the MOST anticipated film of the year! (I know it’s subjective but this is my article so…eat it).  Okay okay!! I’m over vamping so let’s just get to it.

I have three words to sum up the excitement I felt watching this for the first time…William FREAKING Sadler!! Yes ladies and gentlemen, Death has returned and was air guitar jamming with our boys once again!! Seriously…here’s another picture of him just to show you how awesome this is!! Bill & Ted Face the Music is slated to hit theaters (fingers crossed) on August 21st, 2020. Directed by Dean Parisot

In the midst of all this most heinous COVID-19 stuff, fans of the highly anticipated Bill & Ted Face The Music have been, ironically, concerned about the future of our musical saviors. Rumors have circulated that the film would, more than likely, end up pushed out of theaters and land on streaming services or wind up like John Wick 4 and the fourth Matrix film (I know…all Keanu vessels), pushed to net year. One fan took to twitter to ask Alex Winter (aka Bill S. Preston Esq.) himself what the status was regarding our wayward time travelers and here was Winter’s response

“Hey, thanks for asking. Everything is great in BT3 land. The cut is almost done and looks fantastic. Teasers and trailers are ready to go. Like every movie slated for this summer we had to stop and reorganize due to Covid. Teaser coming in a few weeks, news on release soon!”

Although this doesn’t confirm nor deny anything, the news that the film is firmly in post-production AND that trailers will be coming soon is, as our heroes would say, most tranquil. I will throw my prediction out there and say that, although Face The Music is still set to release August 21, that would put them smashed directly between Wonder Woman 84 and The New Mutants, Orion Pictures will opt to move Bill and Ted to a streaming service with the possibility of a theatrical release further down the road. Either way it pans out, I am overjoyed at the news that we will have a trailer soon! Check back with us here at Nowhere California for trailers and trailer reactions/breakdowns. Until then…Be excellent to each other and…PARTY ON DUDES!! 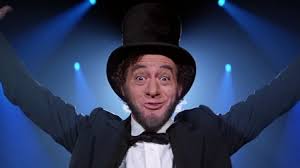