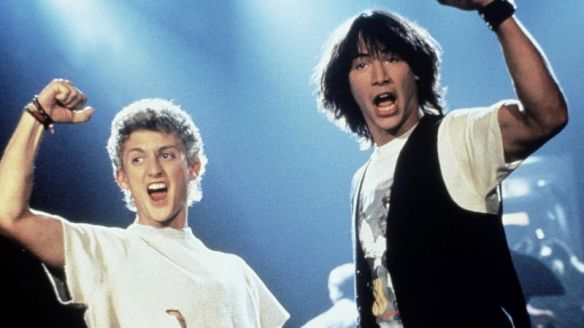 The year was 1989…I was 13 and I was driving my mom nuts by responding to simple good news by shouting “Excellent!” and throwing air guitar or “Bogus!” over bad news. I watched Bill and Ted’s Excellent Adventure on a loop everyday for the better part of a year.

Into the phone booth we go to 1991. Bill and Ted’s Bogus Journey hits and I lost my marbles and so did my girlfriend who had to deal with me! I burned out my Sony Discman playing KISS’ God Gave Rock and Roll To You and threw out my shoulder with more air guitar!

Back into the booth we go to a few days ago when Alex Winter and Keanu Reeves sent a short clip from the Hollywood Bowl and OFFICIALLY confirmed Bill and Ted 3: Face the Music will be filming this summer! I just threw out my shoulder again but it was well worth it!! This most non-heinous news was supported by the reveal that William Sadler would be reprising his scene stealing role of Death for the third installment. OW! My shoulder can’t take much more of this! This film is a direct result of how fan support can influence a movie to be green lit with the help of the very enthusiastic original writers Chris Mattheson and Ed Solomon. Seriously, I’m gonna go call my doctor about my shoulder while you go enjoy the announcement video below. Be excellent to each other and…PARTY ON DUDES! Dammit I did it again! Bill and Ted 3: Face the Music is slated for a 2020 release so stay tuned right here for any breaking news!