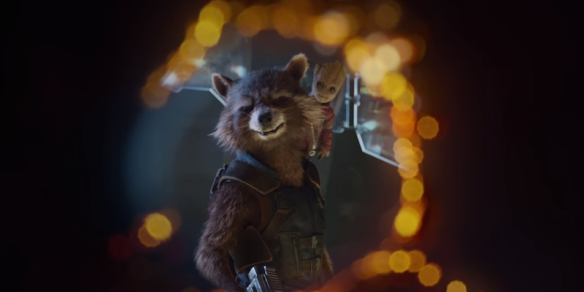 “I am Groot!!!” That’s how excited I am for this teaser trailer! Let’s get something straight right away. I am a comic fanboy and I love everything Marvel is doing with their films. That being said, there was a huge expectation placed on each and every film that came before Guardians of the Galaxy. I believe the phenomenal success of the first film is completely due to notion that almost NOBODY had read a Guardians comic prior to the film. I will pause here for all of the Cheetos Puff and Mountain Dew Baja Blast fueled outrage aimed at me by those who actually did read a Guardians comic…All out of your system fanboys and girls? Good now pipe down!! I remember when Marvel had announced it’s phases and people look confused about Guardians. Jump to that weekend opening and sweet baby Jesus!! The first film was amazing and it had all to do with the vision of James Gunn as well as the tremendous cast he compiled. I mean come on!! Glenn Close!? Back to present day and I stand here with wet ring around my crotch because I have peed myself with pure joy. This is just a teaser trailer and it doesn’t give us much except the returning major players, the Blue Suede playing in the background, some badass slow walking, and a pretty funny moment between Drax and Peter Quill. Close it out with some Rocket and Baby Groot and you’ve got this guy hooked. Join me in theaters on May 5th, 2017 and you can throw Milk Duds at me while I geek out over the Guardians of the Galaxy Vol. 2!