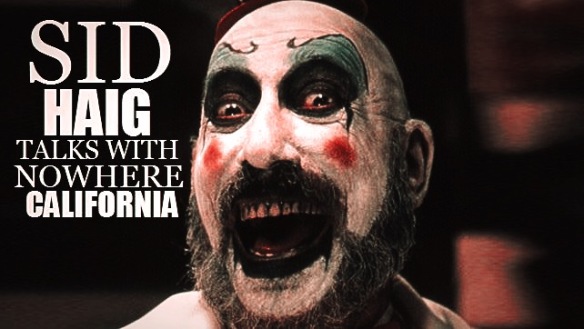 The following is the finale of Nowhere California’s coverage of the 2016 Los Angeles Days of the Dead convention and in this installment the guys have fallen prey to some top secret clown business, as Josh and Doug talk with horror icon Sid Haig.

Sid is a legend of the silver screen, with a list of over 100 roles to his name and an impact that can be felt in many genres of the film industry. In recent years, Sid has become a mainstay in the convention world and a familiar face to the Days of the Dead loyal.

During Nowhere California’s adventures at Days of the Dead, the guys from Nowhere have made it a point to bump into this legend and we have been lucky enough to sit down twice with the man behind the clown make up..

CLICK HERE  For Nowhere California Presents Our Conversation With Sid Haig From The 2013 Days Of The Dead Convention (11:26)

CLICK HERE For Nowhere California Presents Another Conversation With Sid Haig From The 2016 Days of the Dead Convention (6:18)

As with all of our conversations, everybody on the Nowhere California team would like to extend our thanks to Sid Haig. It was an absolute pleasure talking with this icon.