To quote the movie itself: “Hulk Hogan eat your heart out!” Fans of the iconic BMX movie RAD will be mounting up on their Mongoose or Skyway bikes and heading just outside of Dallas Texas to TexPlex Park June 22-24, 2018 for a chance to “walk this sucker.” A festival honoring the film RAD is taking place with a full scale recreation of the legendary track that fans will get the chance to ride as well as a “BMX Boogie”, qualifying races, flatland freestyle, and, of course, an 80’s party.

Bill Allen, who played the hero Cru Jones, will be in attendance as will top industry riders to show off their BMX prowess. No word yet whether Lori Laughlin or Bart Connor will be making an appearance but keep posted here and we will bring you updates as they happen. Camping will be available as well as info on nearby hotel accommodations, pre-sale ticket info, and general info regarding the track on the TexPlex FaceBook page located here: https://www.facebook.com/helltracktexplex/

Time to dig out my checkered Vans slip-ons, polish up my GT Pro Series, throw on my Rad Racing shirt, and start racing my local police officers through the lumber mill so I can show off at TexPlex Park next June! I just hope they have the “KiX” sponsored cereal bowl for me to pull a gnarly air walk out of to take the lead in my final lap at Helltrack!! (Seriously, there was a giant cereal bowl!)

Type casting is sort of a duel edged situation, for performers it can guarantee work and a long life in Hollywood. Also, type casting can become very stale and most performers can get lost in the everyday shuffle.

In the world of comedy, the traps of type casting can be easy to fall into and for most performers the greatest risk is to not fall into one of these holes. The list of comedic performers that have broken out and taken a dramatic risk have grown over the past few years, with a lot of big screen success and Sarah Silverman will soon add her name to that list.

Sarah Silverman stars in the upcoming drama “I Smile Back” and plays Laney Brooks. Laney is a mother and wife that travels a road of destruction, in which her vices are leading to an end of her “loving” family. As the end looms before her, Laney must take a final chance at redemption.

“I Smile Back”, which is based on the novel by Amy Koppelman and is directed by Adam Salky, is rounded out by an amazing cast. The cast includes Josh Charles (Masters of Sex and Adult Beginners) Thomas Sadoski (The Newsroom and John Wick) and Mia Barron (Newsreaders and The Venture Bros.)

As you can tell by this trailer, this movie is coming out of left field for Silverman and this should not be a surprise. In her career, Sarah has attempt very different roles and genres to the enjoyment of most viewers. Also, she has seem to make it a point to not be trapped in a type casting situation and challenge herself as a performer. In this role of Laney, I will bet good money that she will be making the awards circuit in the upcoming year.

“I Smile Back” will be released on October 23rd.

There are some moments in life that you are ready for, but sadly there are sometimes that no one can ever be ready. A member of the Nowhere California family informed us of the story of Baby Brindan and tragic events that his family are still recovering from. 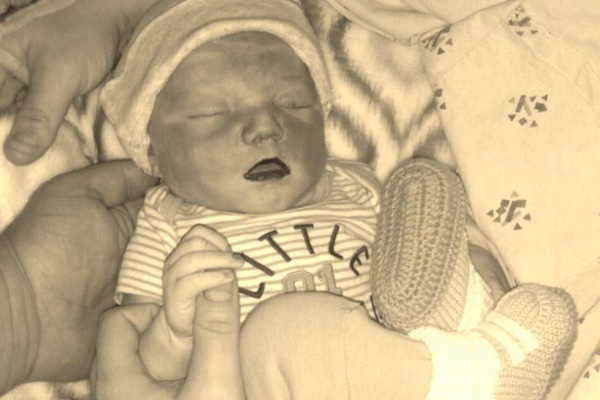 Brindan was set to enter this world on Aug.1st, but sadly died in the womb the day after and his family could use your help. They have set up a page at Go Fund Me For Brindan to help with the cost of funeral expenses and they are very close to their goal.

Please go to their page, learn their story and send your support. A dollar and/or a kind word can go a long way.