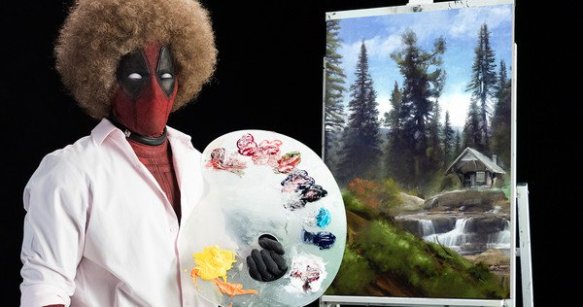 With the holidays fast approaching, the recent release of Thor: Ragnarok, the upcoming release of Justice League and Star Wars: The Last Jedi, Deadpool arrived and gave us a release…straight into our pants! Everyone’s favorite Merc’ With A Mouth dropped a teaser trailer a-la-Bob Ross to remind us that none of that other shit matters because Deadpool is coming…to theaters…not…oh never mind.

Twentieth Century Fox posted their official synopsis for the highly anticipated sequel and they describe Deadpool 2 as this:

After surviving a near fatal bovine attack, a disfigured cafeteria chef (Wade Wilson) struggles to fulfill his dream of becoming Mayberry’s hottest bartender while also learning to cope with his lost sense of taste. Searching to regain his spice for life, as well as a flux capacitor, Wade must battle ninjas, the yakuza, and a pack of sexually aggressive canines, as he journeys around the world to discover the importance of family, friendship, and flavor – finding a new taste for adventure and earning the coveted coffee mug title of World’s Best Lover.

We know this much from the trailer…Deadpool is back, he has a sexy slow motion run through the rain, Negasonic Teenage…Whatever The Fuck The Rest Of Her Name Is is back and still giving the bird, Dopinder doesn’t swallow, Chunk from The Goonies is pulling a Drew Barrymore in Firestarter, some irresponsible prick has given a blind woman a gun, Deadpool does a spot on Jesus impression and rises from the grave, and at very end, Michael Jackson has a new shiny glove…or maybe I need to adjust my Cable. Well, I’m gonna go do some blow, you scroll down to watch the trailer and take the “Don’t Nut in Your Pants Challenge.”

Dalton is listed as Security in the credits…these guys are killing me.

As in most Hollywood successes, a speed bump is bound to creep up and everyone’s favorite merc with the mouth has ran head first into a hard bump. Tim Miller, the director of the original blockbuster DEADPOOL, has left the production of DEADPOOL 2 over creative differences.

After the news broke, the rumors started to flood the internet and the truth could be stranger than fiction, but a rift between Miller and Ryan Reynolds seems to lead the charge. The studio has been quick to keep the news in a positive light, as they have already announced their next project with Miller. Fox has released information that Miller will begin work on the adaptation of Daniel Suarez’s science fiction novel, Influx.

In Hollywood creative differences happen as often as rehab stints, but they can hopefully end the same way. I am a massive fan of DEADPOOL and the extended world the movie unleashed, so any static could bring upon something amazing and very little property damage.

Now, due to this issue, the release date for DEADPOOL 2 is up in the air.

On this glorious eve of the greatest smart-ass superhero….wait…anti-hero…wait…X character…OH FUCK IT! Before Deadpool feels us all up in a darkend theater tomorrow, we get our most honest review from none other than the foulest (and hottest if you know me!) mouth in Hollywood…Betty fucking White!!! So without further ado, I will shut the hell up and let her share her thoughts on Deadpool as well as Ryan Reynolds’ smoking’ hot ass!

It has been a magical 12 days and as the yearly War on Christmas truce goes into effect, Deadpool has delivered a package that he want to show the world. Also, the Merc with the Mouth has a new trailer for the movie goers..

Now, it is time to take Deadpool’s advice and enjoy the majesty that is the “Red Band” trailer..

If that isn’t an uncanny and magnificent finale for the 12 days of Deadpool, then I don’t know what could be. This trailer shows the hardcore edge and spirit of the comics will not be lost in the translation to the big screen. This movie will be the swift kick to superhero genre’s balls and the aftermath will be felt for a long time.

I don’t know your plans for February 12, 2016, but my plans are set and I’ll be seeing this movie multiple times.

‘Twas the night before the trailer and all through the internet, not a creature was stirring but a Merc with a mouth. The time has finally arrived and we are at the eve of the new Deadpool trailer.

Today is the 11th day of the marvelous 12 days of Deadpool and our day started with a ghost of Deadpool past..

Wolverine, Deadpool’s fellow WEAPON X survivor, decided to commandeer the festivities and treat us to this special image. As everyone remembers, the last time we saw these two together was in the conclusion of the X-Men Origins: Wolverine and the Merc with the Mouth didn’t exactly have a mouth. It’s nice to see this twosome together under better terms.

Now for the main attraction of the 11th day of the 12 days of Deadpool and an appetizer for tomorrow’s new Deadpool trailer..

The excitement is reaching its peak, we received a new TV spot and some truth behind the Easter egg we discovered from Day 7 (Hopefully, this isn’t the last time we’ll see Wolverine), but the main event is only a few hours away.

Ignore your loved ones and stay locked in, as we will hit the final day of the 12 days of Deadpool. Christmas Day will bring onto the world a brand spanking new Deadpool trailer!!

It’s the night before Trailer’s Eve and there is so much to discuss, from the 10th entry in the matronly 12 days of Deadpool to 2 new television spots and one spot featuring brand new footage from this soon to be classic movie.

As with the past 9 days, we begin with the newest entry of the 12 days of Deadpool and today’s installment is another Merc with the Mouth take on a holiday classic, the relaxing burning yule log.

In the most traditional hands, it’s as simple as an actual burning fire in a fireplace and in other hands, it’s a video loop from a discount DVD. This classic has seen many forms, but here is the Deadpool’s “Pool Log”..

Now, as you relax with you “Pool Log”, here is the newest television spot and you will quick see a few new moments from the movie…

This might have been a short clip, but you get a colossal amount. We get a glimpse at the story and what bring Wade Wilson to the superhero party.

The next clip is quick, but very important. This is a special spot for ESPN’s NBA coverage on Christmas Day, but we learn that we will be getting a special look at Deadpool. We can only imagine that this will be the debut of the new “clean” trailer. Also, Deadpool isn’t alone in this clip and we get a special visit from Weasel.

There you have it, this was a very busy 10th day for this Deadpool event. We are in the final 2 days and tomorrow will bring the surprises of “Trailer Eve”. Since “Trailer Eve” is all we know, watch out and be ready for anything!

The light is starting to come into view and we are getting close to the grand finale of the magnanimous 12 days of Deadpool. Today is day 9 and Deadpool has teamed up with the giant at IMAX to unleash this piece of art onto the world…

If you can’t tell, this is the exclusive IMAX poster for DEADPOOL. IMAX has released some impressive posters in the past and that tradition continues with this masterpiece.

Also, speaking of masterpieces, IMAX released a special teaser to remind everyone that size is very important..

The excitement is reaching a fever pitch, as we are in the final 3 days of this journey and we still have some great gifts to receive. Tomorrow, the man behind the Merc with the Mouth will be delivering our next gift.

The holiday season brings a mixed bag of emotions and most of them you have to mask, either chemically or with distance. Now, everyone’s favorite Merc with the Mouth has stepped in to help with the emotional denial and bestowed upon us, with the help of MASHABLE.com, a set of emoji featuring DEADPOOL..

In a world that has an emoji for everything, it’s about time that we received a set that will help us express our frustration with a Deadpool poo or let people know that we need some personal time, by using the pump bottle with Deadpool’s gloves clapping on the side.

This closes out your 8th crazy installment of the madcap 12 Days of Deadpool, stay close to your computer or Deadpool emoji fill phone for tomorrow’s entry from IMAX.

2 hours, 2 minutes it’s the same thing in the internet world.

Here we go, so here is what we came across in the podcave at Nowhere California HQ. When you open the Deadpool Core email and scroll through the message, you get a few laughs and important information about Deadpool’s year, but there is a little  more.

We randomly clicked on the image and was sent to this YouTube clip..

This is a very interesting clip to pick and, as I write this, it can only be considered rumors..

– Niagara Falls is mentioned throughout the clip. When you search Deadpool’s history with this location, you will find this…

-This next part is very important and I’ll keep it simple. Moe (the straight man) calls Curly (the crazy guy) Bub throughout this clip. Now, when you jump into Deadpool’s world, who calls Deadpool (the crazy guy) BUB! 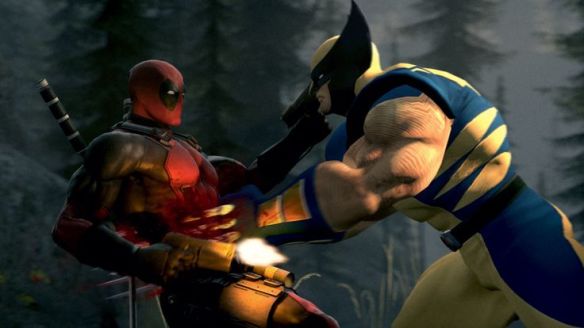